Some of My Favorite Sites


I am happy to be one of the designers taking part in Norden Crafts 2015 Fall Online Needlework Show, which runs from April 10 through April 19.  For more details on the show, go to http://www.nordencrafts.com/C-1418/Norden-Fall-Show-2015.aspx

The first of my four designs for the show is Mary's Little Deer (retail price $14.00). This is a reproduction of an English sampler stitched in 1855 by 11-year-old Mary Maylett.  It is stitched on 32ct Buttercream linen by Lakeside Linens, using DMC floss. 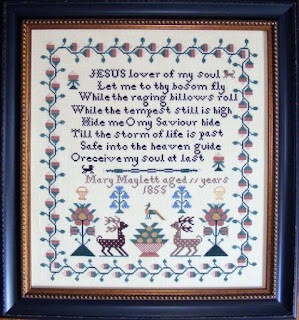 This lovely sampler was stitched by Mary Maylett, the daughter of John and Ann (Monk) Maylett.  She was born in 1844 and baptised on 7 July 1844 in Lindridge, .  Mary was married in 1875 at the age of 31 to George Furness Smith, a Church of England clergyman.  They had two children:  a daughter Mabel Annie Smith born in 1876, and a son Francis Maylett Smith born in 1878.  Sadly, Mary Maylett Smith died when her children were very young--sometime between 1881 and 1886.  Mary would have been proud of both her children.  Francis became a medical doctor and Mabel married a British civil servant and traveled with him to his posts in Africa and .

When Mary Maylett was eleven-years-old, she stitched her sampler in silks on coarse linen.  It was very nicely done and had few counting errors.  It measures 11.63 inches wide by 13.13 inches high, very close in size to the reproduction.  The antique sampler is unframed and is stitched to a backing of polished cotton fabric.

Mary’s two little deer are probably fallow deer, which are common in .  Adult fallow deer often have fawn-like spots, just as the ones on Mary’s sampler.

The second design is Elizabeth Hobson 1800 (retail price $14.00), but I call it the Checkerboard Deer Sampler, for obvious reasons.  It is a reproduction of an English sampler.  The model was stitched on 25ct Natural Dublin linen using DMC floss. 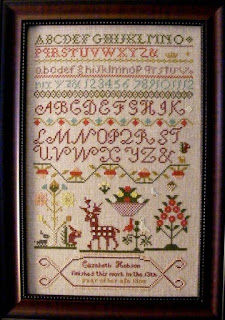 I wish we knew something about the young lady who stitched this delightful sampler. Unfortunately, there are many Elizabeth Hobsons throughout  who were in their 13th years in the year 1800, so that without any other information, there is no way to determine which one of them is our stitcher.

The checkerboard deer was one of the first things that attracted me to this sampler.  Then I noticed the two little squirrels  I wonder what  was thinking when she decided that they should have green tails!

The antique sampler, measuring approximately 10 inches wide by 15.1 inches high, was stitched on a coarse linen fabric in colorful wools which have faded very little over the past 215 years.

The reproduction sampler is the same height and slightly narrower than the antique, and the DMC floss almost exactly matches the wools used in the antique.

And finally we have the Ann Stone Sampler (retail price $12.00), a reproduction of a sweet little English sampler that was stitched in 1816.  The model was stitched on 25ct Summer Khaki Dublin linen, which unfortunately is no longer available.  I recommend using 28 count Summer Khaki Cashel linen, which will make the sampler slightly smaller.  Or if you prefer to keep the sampler similar in size to the antique, 25 count Natural Dublin linen would be a good choice.  The model was stitched using Soie D'alger silk by Au Ver à  Soie 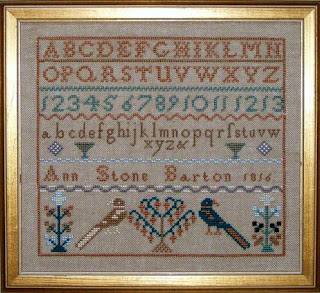 Ann’s sampler was stitched in silks on coarse linen.  It measures 9.75 inches wide by 8 inches high, just a bit larger than the reproduction.  The colors on the back of the sampler remain bright, and the AVAS silks match Ann’s silks almost exactly.  I hand matched the DMC colors, and they are very close matches to the AVAS.

I hope everybody is having a wonderful summer.  Our temperatures have been very pleasant here in northern .  We had a very rainy June, and having to mow the lawn every few days certainly cut down on my stitching time.  Now we could use the rain, but I’ve been stitching more often than mowing, so I’m not complaining too much.

Here are three new C Street Samplerworks designs which will be introduced at the St. Charles Market, August 16-17, 2014.  You can ask your favorite needlework shop to pre-order them for you: 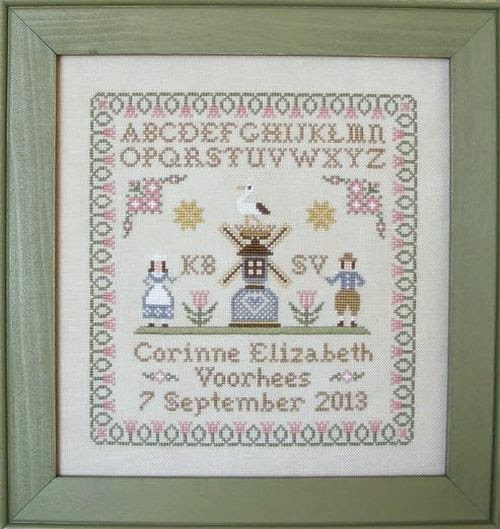 In September of 2013, my great-niece was born.  Her birth was quite an occasion, as she was the first baby born in our immediate family in 29 years.  Of course I had to design and stitch a birth sampler for her!  I chose a Dutch theme because our Corinne has Dutch ancestry by way of three of her four grandparents.

“Corinne’s Sampler” is stitched almost entirely in cross stitch on 32ct Lentil linen by Lakeside Linens, using DMC floss.  The stitch count is 119 wide x 129 high, and the design size is 7.4 inches wide by x 8.1 inches high.  The grass in the model is done in satin stitch.  But if you aren’t a fan of satin stitch, don't worry--go ahead and stitch the grass area in cross stitch.  I promise that it will look just fine either way.

He Saith to the Snow 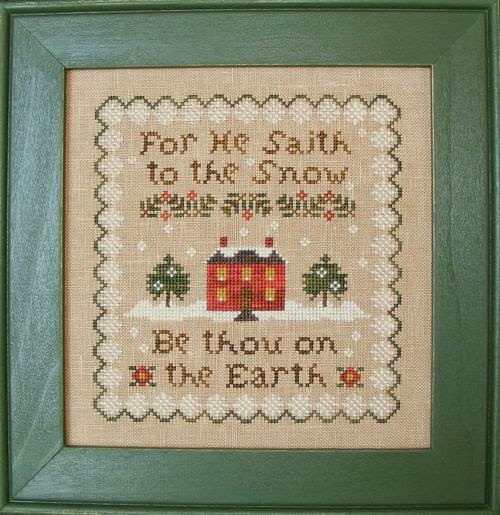 In commemoration of our recent record-breaking winter, both in snow accumulation and in below zero temperatures, I designed this little sampler.  The Bible verse (Job 37:6) seems fitting, because last winter the snow certainly was upon the earth in the , as well as other parts of the country.

I like to think that the people who live in that little house are cozy and warm despite the wintery weather surrounding them. 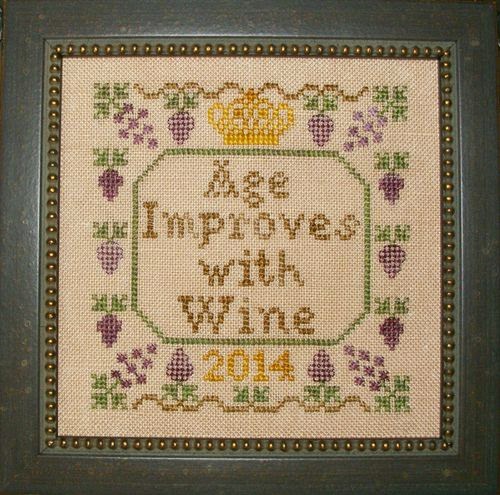 This little design is dedicated to all my friends who, although perhaps not quite as old as I am, still appreciate the healing qualities of the occasional glass of wine.  This would make a perfect little gift for a friend who is facing one of those pesky “milestone” birthdays.

“Age Improves with Wine” is stitched on 32ct Examplar linen by Lakeside Linens, using Gentle Arts Sampler Threads.  Stitch count is 63 wide x 63h, with a design size of 3.94 inches square.  I chose to have it framed, but it would be great finished as a cupboard hanger or an ornament.

A note about overdyed floss:  I love stitching with overdyed flosses, especially those from The Gentle Art.  But as most of you know, the dye lots of all of the brands can sometimes vary.  For this reason I generally list DMC equivalents for comparison.  I match the DMC to the actual skeins of overdyed floss that I use in the design.  Each DMC equivalent listed in my charts is as close as I can find to the particular dye lot that I use when stitching the models.

I never use conversion charts of any kind, because although suggested individual colors in the charts can be a close match, they are often just a bit off.  And when you combine several colors that are just slightly off, they can clash with, rather than complementing each other.   That is why I always match colors by hand. (Make that “by eye”!)

*******
Currently I’m working on the model for, a reproduction of an 1855 English sampler stitched by Mary Maylett.  It has the first verse of the beautiful hymn “Jesus Lover of My Soul”, and among the motifs are two sweet little fallow deer.  Mary was born in 1844--100 years before the year of my birth, which makes me feel connected to her.  (It also makes me feel very old!)
Posted by C Street Samplerworks at 11:09 AM 4 comments:

One of the most notable landmarks in my home town is the Door Prairie Barn, built in 1878 by Marion Ridgway.  It is quite unusual because it has nine sides.  It must be one of the most photographed structures in the area--I have seen photos of the barn taken in the summer, fall, winter, and spring.  It has also been the subject of countless paintings by artists both amateur and professional.

Years before I had released any C Street Samplerworks charts, I designed and stitched a band sampler featuring the Door Prairie Barn.  It was for my own pleasure and I had no intention of charting it.  However over the years, several local stitchers expressed interest in the sampler, so I finally published the chart.  Since the sampler depicts a local landmark, I didn’t expect the chart to be popular nationally, so at first it was available only through House of Stitches in .  But I found that stitchers in other parts of the country were buying the chart.  So the Door Prairie Barn Sampler chart is now available to local and online needlework shops through my distributor Norden Crafts.

Several of the bands reflect motifs that have come to be associated with the barn and the area.  For a number of years the field in front of the barn was planted with thousands of golden sunflowers.  Other years pumpkins filled the field.  I included a band of maple leaves, because , with its tree-lined streets, has long been known as The Maple City.

I spent many enjoyable hours researching the barn, including reading through 19th century newspapers for advertisements to find the names and breeds of the horses owned by Mr. Ridgway.

The verse on the sampler reads:  "South of LaPorte, stands a nine-sided barn built in 1878 by Marion Ridgway.  On eight sides are stalls, each with its own door and window.  The ninth side is the main hall.  Ridgway was a breeder of horses—Normans, Clydesdales, Percherons, Morgans, Cleveland Bays and Hambletonians, with noble names like Grandee, Duke of Lexington, Lucas Brodhead, Greensburg, See-Saw, Nevoy, Constellation, and Bordeaux."

The second release, also available through Norden Crafts, is a reproduction of a circa 1830s English sampler stitched by Hannah Wilson, aged 11.  I was first attracted to this sweet sampler by the purely secular verse about the art of conversation.  It was such a change from the more common, and sometimes depressing, religious verses.  Then I noticed that the central motif at the bottom was a variation on the small Solomon’s motifs that are among my favorites, so I knew I had to add Hannah’s sampler to my collection.

Here is a photo of the antique sampler:

The reproduction, shown below, is stitched on 32ct Homespun linen by Lakeside Linens, using 6 colors DMC floss, and is worked entirely in cross stitch over two threads.  The stitch count is 149 wide by 202 high, and the design size is 9.25 inches wide by 12.63 inches high.

Wouldn't you love to know more about this little girl who preferred to stitch a verse about the lively art of conversation rather than one of the more usual religious verses? Unfortunately, she is likely to remain a mystery to us.  The sampler isn't dated, and "Hannah Wilson" was a very common name in 19th century England, so I have been unable to determine which one of many possible Hannah Wilsons stitched the sampler.  I like to think that she must have been a very special girl, though.